Ordination of Jackie and Lawrence 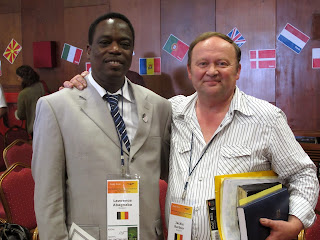 The highlight of the Sunday morning service at the 2013 Church Leaders Conference was the ordination of Lawrence Abagnaba and Jackie Barbier. Both Jackie and Lawrence serve with the Free Methodist Church in Belgium, ministering in Oostende and the surrounding area. Lawrence's wife, Perpetua, and Jackie's wife, Ching, were able to participate in the ceremony. Thanks to Scott Dunn for recording this event!
Posted by Larry Winckles at 3:26 PM No comments:

Thanks to Péter Tóth for putting together this highlights video.

Posted by Larry Winckles at 11:45 AM No comments: 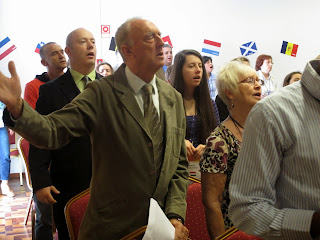 Here is a link to conference photos taken by Larry Winckles. Other photo albums and videos will be posted as they are made available by the photographers. CLC 2013 Photo Album

Posted by Larry Winckles at 6:41 PM No comments: 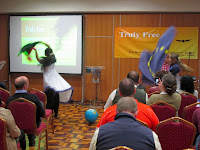 The final service of the 2013 Church Leaders Conference started out with a celebration song and dance performed by members of the worship team. The worship team was coordinated by Cindi Angelo and led by Hugo Conceição. Other team members included Carla Conceição and Marcio and Julia Vitorino from Portugal; Péter Tóth from Hungary; Kali Long, Alkaios Papnagis, and Maria Long from Greece; and Diane Mellinger from Bulgaria. This international group worked extremely well together and contributed greatly to the conference. 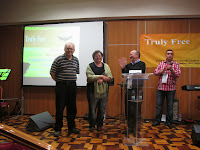 Thanks were expressed by Bishop Roller to Larry Winckles and Júlia Tóth for their leadership in organizing and operating the conference. Larry then expressed thanks to his team of assistants - Katie Winckles, Margaret and Joe Tanner, Al and Diane Mellinger, and Scott Dunn. Special thanks was given to Cindi and Eduardo Angelo for their assistance with the advance preparations and arrangements with the hotel and with ground transportation. 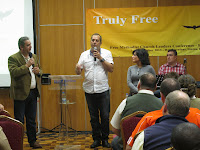 Carmelo Palmés Guedes, ministerial candidate from the Canary Islands, gave a short testimony and spoke about the new work in Fuerteventura that will utilize Community Church Planing principles. 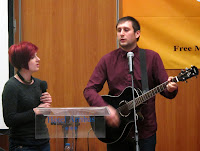 Kali Long and her husband, Alkaios Papanagis, sang "Seek Ye First the Kingdom of God" in Greek. Alkaios is a trained opera singer with an wonderful tenor voice. Together they blessed the Lord and those gathered for the service. 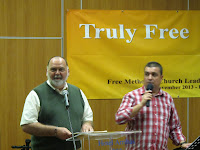 Mitch Pierce was the final speaker of the conference. He spoke on "Being a Church with Impact." 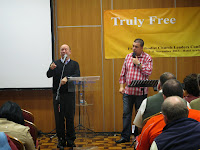 Bishop Roller concluded the conference by announcing that discussions were underway to hold the 2015 Church Leaders Conference in Sofia, Bulgaria. He then dismissed CLC 2013 with a prayer and a blessing.
Posted by Larry Winckles at 6:13 PM No comments:

The Sunday schedule for the Church Leaders Conference was a bit different from the previous days. Following breakfast most of the group gathered on the patio of the hotel for a photo, taken by Kevin Austin. Immediately following the photo session each person participated in one of three different workshops. 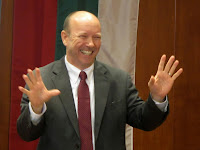 Bishop David Roller led a workshop for all pastors and ministerial candidates. 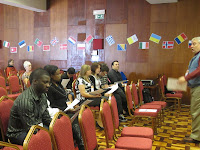 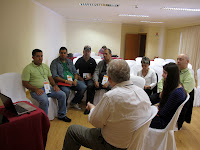 Larry Winckles and Gerard McNamara led a workshop called "An Introduction to the Free Methodist Church" for people who were new to the denomination. 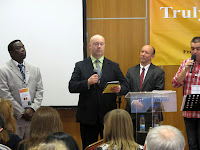 The highlight of the conference was the ordination service that followed. Most of our ordained elders in Europe took part in the ceremony. Michael Long opened with the Call to Worship and the Collect. Larry Winckles presented the candidates for ordination to Bishop Roller. Gerard McNamara, Cindi Angelo, and Ralph Locke read from the Scriptures.

Ordinands Lawrence Abagnaba and Jackie Barbier each gave their testimony, and thanked their mentors who helped them along the way, including Lucien Behar, Todd Miller, Marcie Huson, Dick Dickinson, Jerry Coleman, and Larry Winckles. 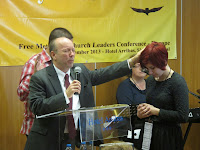 A special offering was taken to support Kali Long's work on the streets of Athens, Greece. Kevin Austin of the Set Free Movement has been serving as an advocate for Kali and the work among those who have been trafficked. Approximately 350 euros were raised for her support. 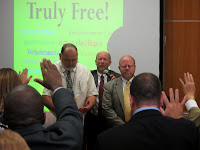 Bishop Roller then preached a sermon based on I Kings 19 and the story of Elijah, Jezebel, and the prophets of Baal. 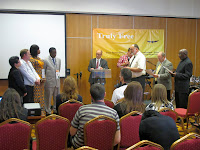 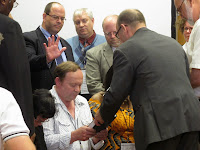 Bishop Roller charged each man to take authority in ministry and to rightly handle the Word of God. Following the ordination they were presented with their parchments and congratulated by all present. 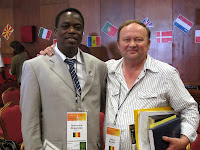 Jackie and Lawrence work together in and around Oostende, Belgium with a wide variety of nationalities -- Filipino, Latino, African, and Belgian to name a few. These men work more than full time at secular jobs and have family responsibilities, yet they are selflessly dedicated to shepherding the flock that God has given them in Belgium, without pay. We pray that they will be strengthened for ministry and that all of their needs will be supplied.
Posted by Larry Winckles at 5:39 PM No comments:

On Sunday morning most of our group gathered for a photo on the hotel's patio overlooking the beach (Praia Grande). Left click to expand, right click to save. 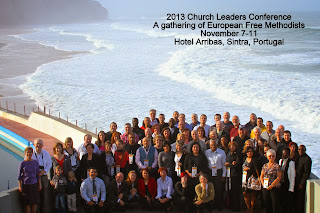 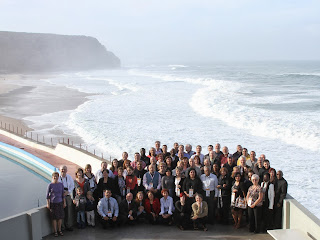 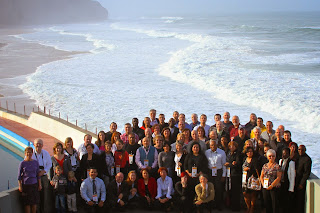 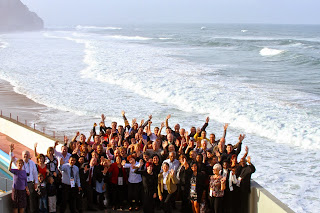 Posted by Larry Winckles at 11:19 AM No comments: 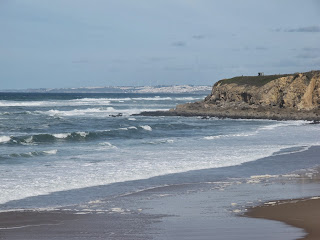 It was another gorgeous day in Sintra! 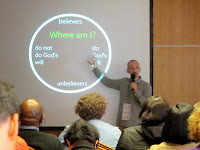 The schedule for the day was quite similar to that of Friday, with Josef Sykora starting out the day with the second part of his Bible teaching. Considering the parable of the sower, he helped us to see that parables both hide and reveal. We must ourselves enter into the story in order to engage with the riddle and be able to speak about the ultimate mystery of God. We need to create a space in how we speak so that other people can enter and themselves engage with the story. 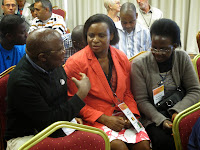 The two workshops that were offered on Friday were repeated today, this time with translation in different language from that of the previous day. As had been the case on Friday, people were shocked to hear about the prevalence of human trafficking throughout Europe. And Norbi's emphasis on holistic biblical counseling stirred many people to reflect on how their own counseling ministries could be more effective. 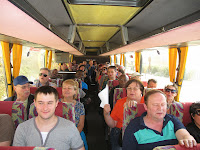 During the afternoon free time a large group took a bus tour to Cascais and Lisbon. The European MEG Board meet during this time to interview six ministerial candidates - Carmelo Palmés Guedes from the Canary Islands, Joel Louidor from France, Hugo and Carla Conceiçâo from Portugal, and Santiago and Laysse Magalhâes from Portugal. These candidates were received as European Ministerial Candidates during the evening service. 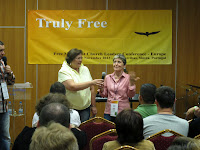 Ildikó Kóber from Hungary shared her testimony during her interview with Júlia, telling about her recent studies in a YWAM discipleship program in Romania and Moldova. You can hear Ildikó's recorded testimony at https://vimeo.com/64550078 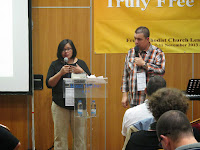 Marites Aquino from Belgium also shared her testimony, telling of her emigration from the Philippines and the trials of faith that she encountered in the years that followed. 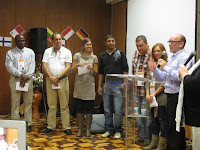 The highlight of the evening was the reception of the European Ministerial Candidates, named above. It was wonderful to hear about their current ministries and their vision for the future. They are men and women who are passionate about following Christ and helping others come to him by faith. 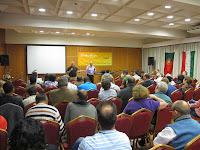 The evening speaker was Pastor Keith Cowart from the Christ Community Church in Columbus, Georgia. He spoke on biblical leadership and challenged every leader present to go forward in faith, following God's call and to bring others along with them.
Posted by Larry Winckles at 11:49 PM No comments:

1. What is CLC 2013? - CLC 2013 is a Church Leaders Conference sponsored by the Free Methodist Church in Europe for pastors and key leaders of local Free Methodist congregations and for other church leaders that are interested in learning more about the Free Methodist Church.
2. Where will it be held? - CLC 2013 will be held at Hotel Arribas, Sintra, Portugal approximately 40 km west of the Lisbon airport. The hotel is located on the Atlantic coast and is a favorite location for surfers.
3. When will it be held? - CLC 2013 begins with the evening meal on Thursday, November 7 and continues through breakfast on Monday, November 11. Plan on arriving at the hotel no later than 17:00 on November 7. Plan your departure for any time on November 11.
4. How much does it cost? - The regular registration fee for CLC 2013 is €180 per person, double occupancy, which includes four night's accommodation and all meals during the conference. Payment will be accepted in other currencies at the exchange rate of the day.
Late Registration €200 - after October 4 registration can occur on a space available basis for a late registration fee of €200.
In all cases the single supplement is €50.
5. Is financial assistance available?- The conference registration fee already reflects a substantial subsidy, so no further discounts are available. Funds to assist with travel expenses may be available. Please contact your country leader for more information.
6. What is the registration deadline? - Please register for CLC 2013 as soon as possible, but no later than Friday, October 4, 2013.
7. How do I register? - You can register for CLC 2013 either by submitting the online registration form (click on the link to the registration page, located at the top of this column) or by sending the registration information to fmc.europe@gmail.com. In either case you will receive a confirmation e-mail in return.
8. What if I need to arrive early or stay longer? We can make reservations on your behalf at the conference hotel at our actual cost (which is a discounted group rate). It will be your responsibility to pay for this. Otherwise, you are free to make your own reservations anywhere you'd like in Lisbon and transfer to (or from) the conference hotel at the appropriate time.
9. What about transfers to and from the airport? If you arrive on Thursday, November 7 before 4:00 p.m. we will make arrangements for group transfers to the conference hotel. If you depart on Monday, November 11 we will also arrange for airport transfers. Outside of these two times you will be responsible for your own transportation. Information about ground transfers will be posted soon.
10. What if I have other questions?- Send any other question you may have to fmc.europe@gmail.com.